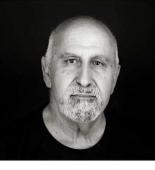 FRANK CARUSO:A BEAUTIFUL LIFE by Stuart Rosenberg Frank Caruso, who touched so many with his talent ,warmth ,and love,died unexpectedly of complications during convalescence from surgery on April22,2019. Born in 1948 to Sicilian immigrant parents,his musical gifts were apparent from an early age.He began playing accordion as a small child, and eventually mastered the piano starting in his late teens.He spent his entire life devoted to his family, to music, and to God.In all these things,he brought a profound sense of generosity,curiosity,and enthusiasm that inspired and changed the lives o fhis students,friends,colleagues,and fans.Frank possessed a rare blend of humility,genius,and diligence that yielded the affection and respect of his peers and students and endless accolades from fans and critics.But the most important elements in this rich tapestry of life were God and his family:his wife,Darla,and their 7 children and eight grandchildren remained the center of his life no matter how exalted his musical achievements were.Frank' s musical gifts were in demand from the age of twelve,leading to countless prestigious engagements.As a young man,his playing was often heard in the WhiteHouse by U.S.presidents Nixon and Clinton,foreign heads of state,senators,and other dignitaries during his service in the United States Navy ,where he further developed his excellence in jazz.One of his proudest musical moments at the WhiteHouse was playing for Duke Ellington’s birthday celebration,with Duke and all of the great luminaries of American music listening to him at the piano.It was during his time in the navy that he married Darla,who he'd met while studying Musical Performance at DePaul University,and they soon started a family that continued to grow until there were 7 Caruso children.Following his military service and a short return to Chicago to play jobbing gigs and jingles,Frank became disillusioned with the music business and sought a change to a quieter life.In a bold move,he left Chicago for a remote spot in the Arizona desert,where he and Darla could raise their growing family and where Frank could begin to draw closer to God.His relationship with God blossomed in the desert,and his devotion to religious knowledge and spiritual growth became the central part of his life. Upon his return from the desert,Frank approached his artistry with a deeper sense of mystery and meaning,He recorded a solo album,Freefall,and commenced along and fruitful partnership with Mark Colby who was an enthusiastic participant in Frank's musical adventures.They recorded two albums,Mango Tango and Heart of the City,and were acclaimed internationally.As Frank's recordings became known,so did the quality of his musicianship and his playing came to be sought out by a constantly growing list of music alluminaries,including Luciano Pavarotti,Henry Mancini,Louie Bellson,Herbie Hancock,Billy Joel,Bernadette Peters,Maynard Ferguson,The Count Basie Orchestra,and multiple appearances with the Chicago Symphony Orchestra.More recently he recorded Songs from the Kingdom of Jazz with saxophonist Jim Massoth and two esteemed albums with the legendary jazz bassist Eddie Gomez,Analea and Chosen.And always there were gigs and more gigs.As Frank would say,"you have to play a lot of songs to pay for seven kids,"and indeed,there were endless songs and endless gigs and he played every one of them with the same level of integrity and commitment.Frank's unique musical skill and insight made him a superb teacher as well as an accomplished performer.He has enlightened hundreds of students over the years,sharing his insight and wisdom as a professor at the American Conservatory of Music,North Central College,Roosevelt University,and Elmhurst College.He wrote extensively about music,including regular contributions to Chicago Jazz Magazine,Downbeat,and,with Karl Mollison,he wrote Piano Improvisation:A Powerful,Practical System,a method book for learning improvisation.Frank derived great inspiration from his mentors,who became his dear friends.Joe Vito,who he spoke with nearly every day,was an enormous influence,as was Richie Fudoli. Both of them shared more than their musical wisdom with Frank-they delighted in the joy of sharing their gifts with the world.This was the hallmark of Frank Caruso's divine spark. His greatest pleasure was found in three things :his family,his love of God,and illuminating the world with the beauty he found in his music.Not too long ago,Frank’s daughter Deonna,inspired by his life and legacy,lovingly directed a documentary film of his life as a musician,husband,and father and presented it for family,friends,and fans at a packed premiere at a theater near their home.There was not a dry eye in the house.It is said in the bible that there is but one thing that exists both in heaven and on earth and that is music.May Frank bring as much joy to heaven as he brought to us on earth,and may his memory always be a blessing for all whose lives he touched.

Dorothy Nowlin
We are saddened to hear of Frank’s sudden passing. May God be with you all at this difficult time. Blessings, Elta Sandell and family
Kimeley Menzies
I am so sorry to hear of Mr. Caruso's passing. Please, accept my deepest condolences, and my prayers are with your family during this time.
Jerry Sarcia
Frank was a great classmate and I knew he would be successful in whatever endeavor he approached after high school. I am sincerely sorry for his familys loss.
Linda Benesh Schuda
So sorry to hear of Frank's passing. It was always a pIeasure when I would occasionally see him at Elmhurst when I worked at the bookstore. Prayers to you and your family Darla.
Ron Steele
Great fellow musician and a wonderful human being.RIP Frank.
Priya Ramesh
A great loss to the world to lose such a warm, caring and talented person. We are so sorry for the entire family's loss and our prayers are with all of you.
M Friedman Family
We are so sorry for your loss and offer our best wishes to all who are mourning Franks passing.
Dennis and Sandy Peluso
Our hearts are heavy with the passing of Frank. I was so blessed to have known him and honored to have played with him. My memories go back to our teen years. He always joked about the band having a Caruso and Peluso together. God has a new piano player. Play on Frank!!!!!
Adam St. James
To the Caruso Family, I am so saddened to hear of the passing of my friend Frank. My son Austin studied piano with Frank for two years and I had the great pleasure of sitting in on the majority of those lessons. I will always remember Frank's wonderful spirit, and his great joy of music. My thoughts are with you at this difficult time. Adam
Paul Coscino
So shocked and saddened by Franks passing. As a fellow musician on the Chicago scene, although Frank and I were friends, we were really more acquaintances. I regret not having gotten closer to with him as a friend as I did sense his warm and compassion as a person besides admiring his musical greatness as a fan. Sincere sympathy shared to his extensive family, and sincere regrets for missing the wake due to previous commitments; a gig and planned family birthday celebration that I could not miss.
Jim Teister
My sincerest condolences go out to Frank's Family. He was a great musician and will be forever missed by his extended musical family. I went to DePaul Music school with him, and was always greatly impressed with his tremendous skills. May he rest in peace.
Velda Davino
So sorry to hear of Frank's passing. He was a wonderful man. He played at my son's wedding. Everyone loved his music. My condolences and prayers are with his family.
Anonymous
It such a thing to find a person who touched so many lives. His love for music and people and of course God, has made an impression on me, that I had to write this and it is all about a time that Jesus Christ spoke about and it was about a future time when the words he had spoken in John 5:28,29 will be made come true. And it is a time when Jesus Christ will instructed by His Heavenly Father and ours, of course, Jehovah God. And this time is explained in that particular verse, about Jesus Christ, resurrecting ones who have died back to life again and the funny thing is the scripture that is connected with, this one, is a one that gives us a clue as to where they will all live, once they are back and alive. Its found in Psalm 37:29 which says: The righteous will possess the earth and they will live forever on it. And so these two scriptures tell us alot about how the future life on this earth will be like. So for more comforting words for the future, then go to JW.org to find what other Blessings Jehovah God has in store for us thru Jesus Christ.
William R. Deacon jr
to frank& family:i was introduced to frank by my brother in law 32 years ago (mark Colby) frank became a close friend to myself & my sister mary. aside from his remarkable musical talent,he touched my heart as a wonderful person.funny,always upbeat&kind.i will always keep frank in my thoughts&prayers as a beautiful&great friend.love forever frank!billy deacon.god bless your entire family!
Jerri Nance
As a fellow musician I appreciated his passion for music and his love of teaching. I was fortunate to be able to hear Frank play live music. Glad his music will live on through his recordings. He will be missed by many. Condolences to his family and friends.