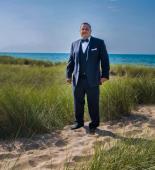 Jose Francisco Recinos, 52, passed away suddenly but surrounded by family on November 4th, 2022. This loss was completely unexpected, leaving family and friends shocked and deeply saddened. He will be truly missed in so many ways.

Jose was born in Chicago, IL on April 11, 1970 and raised by Miriam and Manuel Recinos. He attended Schurz High School and not long after, discovered his passion for home remodeling design, which he dedicated the remainder of his professional career to.

Jose was also always a great athlete and passionate about sports, but particularly loved soccer and basketball. Throughout his youth, he played on multiple soccer teams, acquiring the nickname “Pony” because of how fast he was on the field. It was also not uncommon to find him on the basketball court playing with friends. He also enjoyed celebrating his birthday over the years at Wrigley Field where he was often one of the loudest ones singing “Take Me Out To The Ballgame” during the seventh inning stretch.

Jose had a gift of making everyone feel like family. Anyone that knew him would agree that his energy always filled a room. He was always known as the first one to lend someone a hand and the last one on the dance floor at any party.

We will miss Jose dearly but we are so grateful for the time we had to spend with him. We will always feel his presence in our hearts.