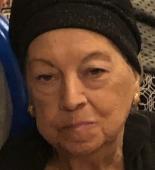 Maria “Mariella” Manuele Sorellino, Age 72, of Chicago, passed away on Friday, March 20th in Park Ridge, IL after a long-fought battle with Leukemia. She was born July 17, 1947 to Gaspare and Teresa Manuele in Palermo, Sicily.
She is survived by her husband of 50 years, Domenico, her children Cristina (Steve) Grosso, Lisa (Rosario) Di Rosa, her grandchildren Sofia Grosso and Nico Di Rosa, and her God-daughter Marisa (Christopher) Laskaris . Mariella is also survived by her brother Tommaso (Pina) Manuele, and sisters Michela (Ignazio) Sorellino, Antonina (Rosario) Iannello, Silvana (Vito) Pannarale, and sister in laws Alfonsa Manuele, Carmela Sorellino. She is also survived by many nieces and nephews and great nieces and nephews.
She is preceded in death by her parents, her brother Andrea Manuele, her grandson Domenico Di Rosa, brother in law Antonino Sorellino and niece Teresa Malamis.

Mariella grew up in Palermo, Sicily, married Domenico in 1970 and immigrated to the United States shortly after. Choosing Chicago, IL as the place to start their family as well as a family business, Mariella invited her parents, along with her siblings to join them. As matriarch of the Manuele Family, she was passionate about upholding traditions and focused on ensuring that her daughters, nieces, nephews and grandchildren knew stories of their family history, learned recipes passed down through generations and enjoyed family gatherings. It was the family gatherings where Mariella was the happiest. Her heart was fullest when her home was full of her family. She will be greatly missed, and her legacy will live on through her family.Due to the current public health restrictions there will be a limit of 10 people allowed inside the funeral home.

To leave a message of condolences for the family, please click below on "Sign Guestbook" and include your email address if you would like to allow the family to contact you to acknowledge your message.

If you would rather mail a sympathy note or card to the funeral home, we will be happy to collect them and forward them to the family.