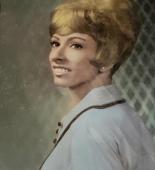 Patricia Culicchia peacefully passed into the arms of Jesus Christ on November 20, 2020 at age 76, surrounded by her loved ones. She is survived by her son, Robert (Heather) Culicchia, and her daughter, Christina (Joseph) Garcia; granddaughters Victoria (Kevin Cramer) Culicchia-Garcia and Myelle Culicchia; grandson Lucas Culicchia. She is preceded in death by her father Carl Culicchia, mother Lucrezia Culicchia, and brother Anthony Culicchia. An outdoor, socially distanced Funeral Mass will be held at 11 a.m. on Tuesday, November 24 at New Hope Christian Community Church parking lot in Round Lake Heights. Burial will follow at All Saints Cemetery, and due to restrictions, will be private.
“My mother was a feisty, generous, hard working woman who was full of love for her family,” said her daughter Christina. “When we were growing up, we would be sending the words ‘I love you’ back and forth from bedroom to bedroom. That’s just who she was.”
Patricia grew up in a huge Italian family off Nelson Street in Chicago and from an early age was a hard worker.
At 19, after graduating from beauty school, she owned and operated her own beauty salon at Belmont and Nelson in Chicago. After getting married and while bringing up two children, she worked as a color technician. In mid-life, Patricia switched careers and began a roughly 15-year career in education, teaching special education at Greenbrook Elementary School in Hanover Park, then working in early childhood development at a Montessori school in Itasca, then as a teacher at Pritchett Elementary School in Buffalo Grove.
“She had a very strong work ethic and instilled that in her children,” said Christina. “She used to tell us that when you earn something there is a deeper appreciation than if it was handed to you.”
Patricia also had a zest for life that never faded. Into her 70s, she still loved drawing, dancing to disco and rap music, driving fast sports cars, and was not above driving 90 miles an hour on the expressway. “She loved acting like she was 21,” said Christina. “She lived in Chicago, Hanover Park, Libertyville, Gurnee and finally Deerfield. I think the police knew her in every town.”
She was a member of New Hope Community Church, and deeply devoted to her Christian faith. So much so that sometimes she worried she might be overdoing it. “She was always talking to Jesus and concerned that he’d be tired of hearing from her,” said Christina.
Patricia equally valued family and tradition. “She taught us it wasn’t the material things that mattered, it was the memories,” said Christina. And on holidays she went all out. “Our holidays were magical. Christmas felt like a Hallmark movie. The house would be filled with the sounds of Christmas music and the twinkle of Christmas lights, and we always looked forward to her Christmas tree cookies, decorated with sprinkles and silver balls and cinnamon hearts.”
Funeral Attendance Guidelines:
- Service will be held outside with attendee’s in vehicles for in-car radio broadcast. (Station broadcast instructions will be provided on day of funeral.)
- Please wear masks if exiting vehicle, and properly socially distance.

Carolyn Hurst
I am so sorry for losing one special lady. She was loved all of us. Patty will truly be missed. I loved all the stories she use to tell us. Miss You Patty Culicchia.
Kenneth Wallock
I will definitely miss her. She would call me weekly to check on me and my health. I had my bladder removed due to cancer as did my wife Pamela who did not survive. I know the both of them are in heaven raising all kinds of chaos as they did here on earth. May God love and take care of both of them.