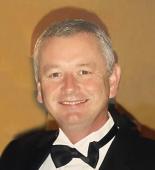 Peter Paul Ruddy, 63, passed away on January 13, 2023. Loving father of John, Clare and the late Peter, and former spouse of Susan McNally. Dearest brother of Mary (Terry) Unwin; Bernadette (Anthony) Sullivan; Michael (Nicky) Flynn; and Anne Ruddy, all of England. Fond cousin and uncle of many. Peter was also preceded in death by his parents, Peter and Winifred "Una" (nee Flynn) Ruddy of Clare Island, Ireland.

Born in Coventry, England, Peter became captivated by America as a young man after listening to stories told by his Irish uncle who worked in the U.S. Peter relocated to the US as an adult to marry and eventually became a US citizen. He started his career as a buyer with Rolls Royce Aerospace in Ansty, England and held several supply chain roles in the Chicago area. He also served as a lector at St. James Catholic Church in Arlington Heights, St. Juliana Catholic Church in Chicago’s Edison Park, and Assumption Church in downtown Chicago. He loved a good laugh, and he had an affinity with other immigrants, whose homeland he was able to identify without fail. His children were his pride and joy, and he had a special place in his heart for Clare Island.

A special thank you to Unity Hospice and the staff at the Carlton at the Lake for their kind and compassionate care.

Mick Flynn
A tragic outcome for you Peter, unforgivable. RIP
Cheryl Mucci
Susan, John and Clare, Peter was such a part of our families lives. We enjoyed his sense of humor, he had the kids clean the basement looking a hamster that was long gone and his baseball skills with the kids. Did I mention a great sense humor?!? Well as Peter would say "Bob's your uncle". seriously he will be missed.
Fr Dave Nixon, Missionaries of the Sacred Heart
God rest Peter, a man of great kindness, deep faith and great humour. Sympathy an prayers to all his family. Mass will be offered for Peter at St Columba's Church, Chesham.
Sharon Campbell
Peter may you rest in peace- the last few years you had a heavy cross to bear but you never lost your faith. Your kindness to others never faltered especially in their hour of need , something I experienced first hand from you and will always remember with much love and appreciation. You will be sadly missed by all of those who had the privilege to know you.
Mary
Peter, you left before we had the chance to say goodbye, but God took you for a better life, filled with happiness and peace. Your beautiful son Peter will now be your guide, take his hand, you are safe. Where love couldn't hold you to this world, it will fill every part of the next. All our Love, your Sisters Mary, Bernie, Anne, Brother Michael & families ❤️
Debbie Lee (Nee Chorney)
Having fought a long hard battle its finally time for you to rest now Peter. Those who were lucky enough to have met you will be mourning the loss of someone who was kind, compassionate and strong beyond belief. A friend to everyone and an ally in times of need. A heavenly welcome awaits you as you are reunited with your loving parents and son and I pray for your family who now have to learn to live without you. It was a pleasure to have known you Peter and I will always remember your wonderful sense of humour, your amazing strength and your resounding faith. You were an inspiration to many. Rest in Peace.
Sandra
In memory of Peter ~ An amazing man with a great sense of humour and a kind heart. It was time for you to gain your Angel wings and you are now back with your Mum, Dad and young Peter. Rest in peace ~ Love from Sandra (PT), Steve and Samantha xx
Fr Paul Lloyd
I was very sad and shocked to hear about Peter's death. I was also very sorry that we had lost contact with each other in recent times. Peter was a very good friend to me. I value the time we spent together over the years. We socialised quite a bit when we were younger and even went on holiday together to Spain and Devon when Peter was still single.i visited him and his family three times in Chicago. They were always very hospitable and kind to me. The sudden death of their dear son Peter devastated the family as you would expect. He was a lovely boy like his father. I imagine the family never really got over it. I hope and pray for happy reunions for them all now in eternal life, the Ruddy and the McNally deceased. God rest them all. It was inspiring for me to see Peter's faith grow and develop over the years.We had some great conversations and recommended books and devotions to each other. I remember a lovely day pilgrimage Peter took me on one Sunday to a Marian shrine in another state, I think it was Wisconsin. It was a beautiful day and I will always remember it. We also went to Walsingham together as well. Peter had a strong devotion to Our Lady and a great love for Scripture. There is so much more I could say. Thank you Peter for everything you gave to our friendship. I will always remember you and pray for you. It is so important that we continue to pray and have masses offered for the eternal repose of our departed loved ones. God bless you Peter and your loved ones. And may you rest in peace. Amen